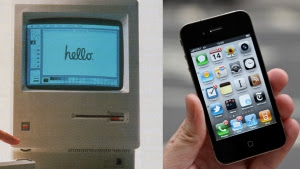 The computing world is by far one of the fastest shifting industries in the entire planet. It seems as if every two or three years, technology makes another giant leap forward in terms of speed, functionality and compatibility. One of the greatest changes in the computer world which has since dominated the lives of many Americans and human beings is the shift from the desk to the pocket. Mobile computing, once a hilarious idea inconceivable due to cost and build factor, is now more than real- it's amazing.

Mobile computing, in all truth, began with the popularity of the cellular phone in the mid nineties and expanded with the release of the iPhone in 2007. You can be an Apple fanboy or an Anti-Apple PC nazi or even a regular dude in a coffee shop, and you'd know that this is cold hard fact. Before the iPhone, smartphones weren't exactly powerful and were only a business man's toy. Ever since the iPhone however, everybody can find a use for a smartphone, even your grandparents. The iPhone isn't just a phone, it's a pocket sized computer with the horsepower comparable to a personal computer only five years ago. But it continues to try and catch up, coming dangerously close to the common consumer computers of today.

You don't need to constrict yourself to an Apple product though. Google's Android solution is just as viable, providing a similar set of content compatibility and usage. Also, the third party hardware support for Android is overwhelming, with a plethora of solutions for just about every feature desired by consumers. Unfortunately, the same cannot yet be said for either Windows Phone 7 or Blackberry- two OS's stuck in the past without many of the "hot" features of iOS or Android. But the night is young, and it never really is too late to make a change, something Microsoft is working very hard to do in order to appeal to their lost audience of mobile dwelling computing trolls.

How else has the mobile landscape changed? Well, in terms of large screen computing, the tablet seems to be taking over the space of your venerable notebook or netbook computer. Yet again, tablets are a revolution not started, but perfected by Apple's iOS solution. The iPad is currently the staple industry tablet and the leader in terms of sales and popularity. Other than the iPad, the only comparable systems would be the Samsung Galaxy Tab 10.1, the Motorola Xoom and the HP Touchpad- all of which were shipped almost a year after the iPad. Touch computing is one of the greatest and most fantasized ways to interact with an interface. It's a natural feeling to see something and want to touch it. For people who have never used a computer, this changes everything. The interface is extremely easy to use and adapt to using, replacing the traditional desktop interface and becoming far cleaner all at the same time. And now thanks to the next iOS 5 update, you no longer need to own a computer to own an iOS device, making touch computing even more accessible to the world.

The desktop unfortunately, is the only unchanged platform in the industry. Computing in terms of sitting down at a desk has grown too difficult for the world and is no longer a requirement thanks to the radical changes in technology in the mobile space. I predict that within the next fifteen years or so, desktop computers won't cease to exist, but simply be used far less than tablets or laptop computers- the next technological medium to be replaced and ultimately eliminated.