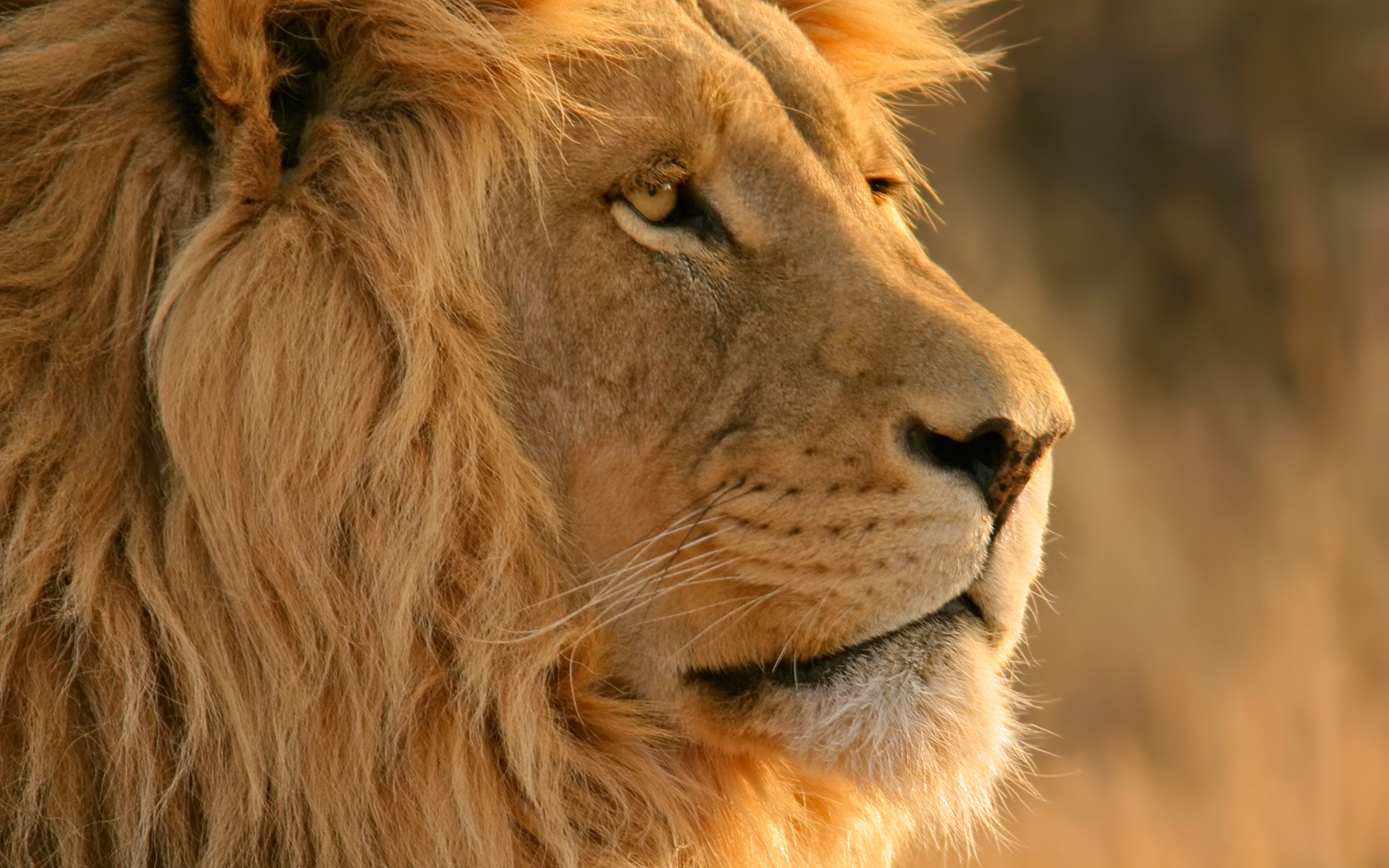 Apple's flagship operating system, Mac OS X, has been around for a decade, with major releases rolling out once every two to three years- unlike it's competitor, Microsoft Windows. Interestingly enough, with each new software update comes not just visual and usability improvements, but also performance and noticeable OS speed changes that always seem to benefit the end user. With the seventh major revision to Mac OS X, a lot is expected from an OS that dares to call itself a lion. But, as it turns out, this name is the best way to define Apple's robust computing platform. Let us begin! 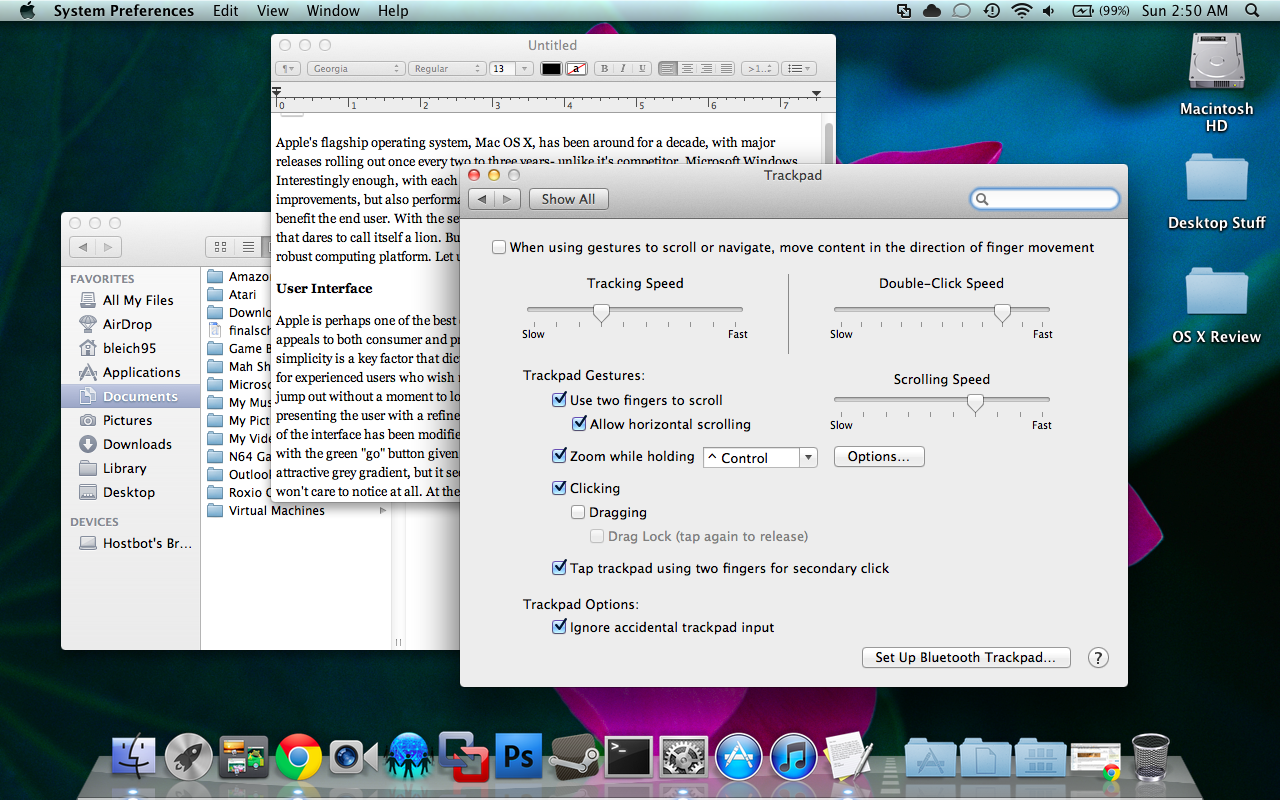 Apple is perhaps one of the best companies when it comes to delivering a solid, speedy UI that appeals to both consumer and professional users. On the consumer end of the spectrum, simplicity is a key factor that dictates how fast simple tasks are accomplished. The same goes for experienced users who wish not to toggle with an OS to make it work, but to jump in and jump out without a moment to lose. Lion manages to accomplish both of these tasks, presenting the user with a refined experience tailored for ease of use. It seems that every aspect of the interface has been modified to some extent. Window Buttons, for example, have shrunk with the green "go" button given a new fullscreen functionality. Windows still have that attractive grey gradient, but it seems that it has become a bit lighter- something most users won't care to notice at all. At the top right hand corner of most windows, is yet another full screen button that allows most apps to jump into the new fullscreen mode and make use of the added space. Remember when Aqua was released? Yeah... that's pretty much faded away. The gooey scroll bars have been replaced with iOS-esqe solid grey ones that fade away when not in use... for most apps. Loading bars, buttons and checkboxes have been slightly modified to help slowly do away with the old, aging Aqua interface OS X grew up with. It was cool then, but its slowly losing its appeal a decade later. Surprisingly, these new features don't feel too cumbersome, and the interface remains very snappy and buttery with very little OS lag issues (But sometimes, when over-multitasking, it's happened to me). One thing that is deathly apparent in Lion, is Apple's love for textures. Whether it's the bumpy, plastic surface in Dashboard, the worn leather in iCal or the grey cloth at the login window, there are textures everywhere. Usually, incorporating these features are great in touch-based interfaces. But the problem is, OS X isn't a touch OS. You use a trackpad or a mouse. Whats the good of these textures if I can't touch them? 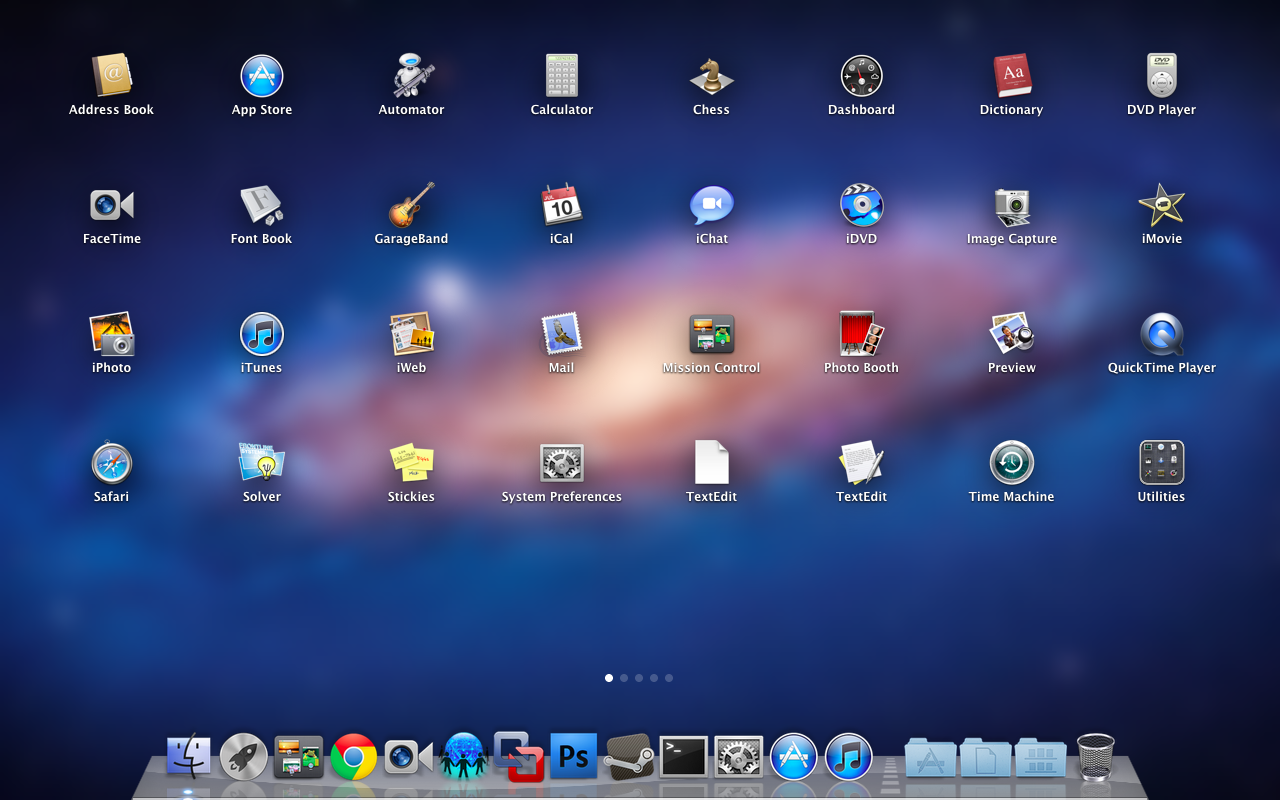 Although widgets have been a part of the OS X family since the 10.4 Tiger release, Expose and many of the aspects of the Finder have been replaced by two newer apps; Launchpad and Mission Control. Launchpad is basically the Mac version of iOS's SpringBoard application- displaying applications in a touch-centric grid-like interface. But honestly, this makes no freaking sense if OS X isn't even touch compatible. Seriously, who thought of this? Not only that, but Launchpad is an application. No, it's not part of the UI. It's an application. This means you need to open it yourself to use it, which its totally senseless when I can simply dash into my Applications folder I keep in my dock, find the app and open it. Another thing I could do, which sometimes is faster, is search for the app and launch it in seconds with Spotlight. So, besides looking pretty, Launchpad contains no real useable aspects to it. 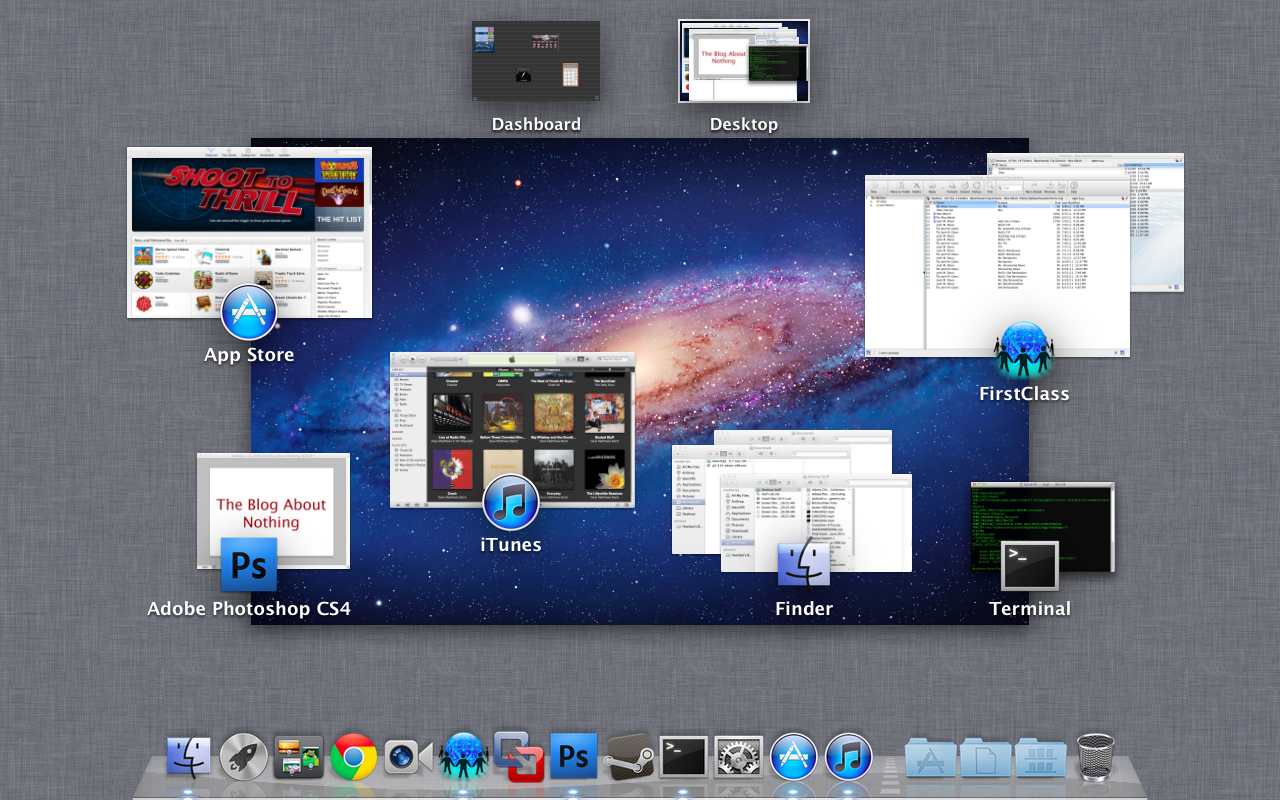 Mission Control however, is a very different story. Imagine Expose merging with Spaces. Yep, thats basically what this is. With the touch of the former expose key (F3 on most Macs) or opening it from your dock, you're immediately launched into a slick interface displaying open applications and the windows that accompany it as well as the current state of your desktop and the dashboard. In the real world, Mission Control has been very useful to me. Typically, I run anywhere from four to six applications as once, and more always seem to be running in the background. I'm a full-blooded multitasking machine. Whether I'm screwing around in Photoshop, blasting Bob Dylan over iTunes, browsing the web over Chrome, writing up a document in TextEdit, checking my email or even playing a game everything is very, very snappy as I jump into Mission Control and switch into other apps. Not only that, but I usually run VMware Fusion with Windows XP in the background, using the apps whenever I need them. All of this with only 2 GB of RAM and a 2 GHz Core 2 Duo. That's simply amazing. As far as widgets go, they're all the same, besides the new isolated panel they will now be living on, which honestly, makes a lot of the clutter go away from the interface.

As mentioned earlier, OS X seems to feel speedier and speedier with every update, and Lion definitely doesn't fall short of expectations. Every little action in the OS is buttery smooth and fast acting, with little-to-no delay time (at least, that I can notice). Opening apps is fast, navigating around the desktop is fast, multitasking enough to burn a hole from the computer is fast. Everything is speedy. As far as stability goes, OS X is the grand standard in protection. Built on the rock-solid UNIX foundation, silly viruses and malware don't even touch the surface of Apple's fierce cat, let alone come near it. If you're in the market for a secure, virus free platform, Mac OS X is always a safe bet. 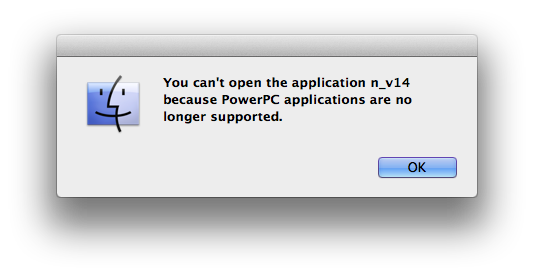 Yes, it happened. Apple removed PowerPC support through Rosetta from OS X. For most people this isn't a big deal at all. For me, this mean Halo Demo support is dead as well as my other favorite old PPC apps. But seriously, how hard would it have been for them to simply port the platform over to 10.7? Would it really have been difficult enough that it would be scrapped altogether? Well, its like this, Apple is moving forward. They officially cut off PPC support with the previous release, Snow Leopard, and now they're cutting off PPC application support with Lion. However, as I've said, most people won't notice as the apps used by most are either going to come from the app store, or the shelves of a store where PowerPC software is nowhere to be seen.

One of the new features of iOS 5 (coming this fall, likely September) is PC-Free. iPads, iPod touches and iPhones will officially be "real" computers, independent of Mac or PCs. Updates will arrive over the air (OTA) and syncing will also be cordless. So honestly, if I really wanted to, I could buy an iOS device like an iPad 2 and never have to worry about updates or anything that would require a Mac or PC. Its not like this isn't a plausible choice either. A lot of people who buy iPads, iPhones or iPod touches don't own computers, and wish to use the devices as such. But honestly, OS X is still a solid platform with tons of support and functionality that make it not only worth using, but rewarding with the speed and stability of a super computer. In the end though, its all about what you need the device for. If you happen to be a college student in need of something to take notes with and use to write up term papers, then a MacBook would for sure be the way to go. However, if you like to travel and be able to just browse the web, check your email and consume media, then the iPad 2 or even the iPod touch is right for you. If you want a go anywhere device for communications, web browsing, email, documents and everything under the sun that fits in your pocket, then the iPhone is the go-to device. If you really like games, then get both an OS X and an iOS device.

If I had to describe Mac OS X Lion in a single sentence, it would go something like this. An amazing operating system and software platform with a robust interface designed for the rumble and tumble of everyday computing. Lion really could have been Apple's Windows Vista, but it isn't. It's speedy, secure, beautiful and simple. For both consumers and professionals, Mac OS X Lion is an excellent operating system and a wise choice for users to upgrade to. In the package you get many new, fantastic features and hey, FaceTime for free!