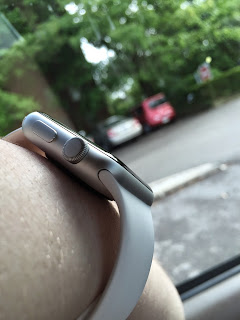 7 A.M, I wake up to a gentle ringing and pick up my beautiful silver Apple Watch from the pseudo-charging cradle that lays beside my bed on a nightstand: it is time for another day with my latest toy and companion.

As I shower, watch on wrist, I shift through Bob Dylan and Joan Baez tracks while checking the weather and responding to late night texts I had missed. The watch, although quoted to be water resistant, is in actuality waterproof for short periods of time and ignorant to certain low water pressures.

On my drive to the office my watch vibrates with a reminder to call my friend David, who I easily ask Siri to call and I talk to from my watch. Is this real life? Sure is! The sound isn't tinny, it's not booming either, but just loud and clear enough to enjoy the conversation instead of dreading it.

Throughout the work day I receive dozens of light taps that don't annoy me the way my obnoxious Pebble did (vibrating so loud it would shake the table under my wrists). The Apple Watch notifies you with taps that almost feel human; light, gentle, graceful. Text from my parents. Text from my sister. Facebook like. Instagram like. Twitter mention. NYTimes update. Tap. Tap. Tap. Tap. This is what notifications should feel like. Most of the time I respond with Siri's brilliant built-in dictation, but I often just respond on my iPhone so as to look like less of a crazy person.

Dinner time, while the rest of my friends tap and swipe away at their smartphones, I sit and try to hold a conversation. I never noticed how truly distracted I am with my phone. It's scary, and it wasn't this way until a few years ago.

As I prepare for bed, after a long night of not-to-be-mentioned shenanigans, I plop my Apple Watch back onto the charger. No grace, due to the heavy buzz I'm feeling from the night. I remain connected through my MacBook Air, where, while enjoying Netflix, I continue to respond to friends until I pass out.

I have spent about a week with my Apple Watch. And just like life after MacBook, after iPhone, after Apple TV, after iPad, I cannot imagine life beforehand. What did I do without this wonderful assistant to my life? And more importantly, how is it that I only now see how our always-on lifestyle has crippled our social potential as humans? 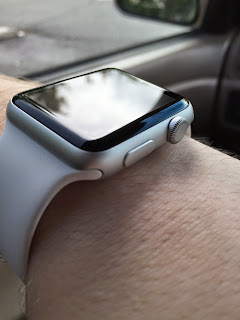 The Apple Watch retains the same form factor in three gorgeous collections: Apple Watch Sport, Apple Watch, and Apple Watch Edition. The sport, being the cheapest, lightest, and cleanest model (in my opinion) was the unit I chose for review and for keepsake. Specifically, I chose the 42 mm silver case with a white sport band. And, like most buyers, I'm readily awaiting my first extra black sport band.

It is worth noting that the Apple Watch, although coming in two case sizes, is probably best chosen in the 42 mm flavor. At the end of the day, the 38 mm model just isn't for most people. It's too small of a screen (despite being only 4 mm smaller!) and a case. But again, that is only my opinion and that of the bulk of buyers. When all's said and done, many people with smaller wrists (mainly women, according to the available data) will still flock to the smaller model.

And, it is very much worth noting that Apple Watch Sport is compatible with Apple Watch bands. So, when the summer comes to a close, I'm going to purchase a leather loop.

Apple Watch isn't thin like iPhone or MacBook or iPad- but it isn't supposed to be. It is meant to be large, defined, accessible, and noticeable. Yet, despite all of these wonderful qualities, it remains very light and very small compared to many watches I own. And personally, I think it is perfect. 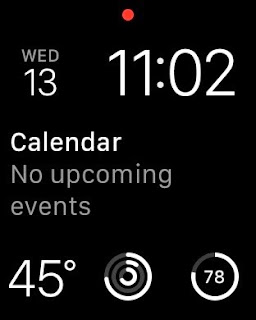 Apple Watch may be a beautiful device to gawk at and wear, but the true genius and beauty of it exists within the software on the display.

What makes the Apple Watch so cool, so easy to use, and so accessible is how seamlessly it unites with my iPhone to deliver notifications in a way that I can finally decide what is worth giving attention to, and what isn’t. The biggest problem I find myself having with my iPhone is that answering notifications is WAY more involved than just that. I surf the web. I check Facebook, my email, who I haven’t texted in a while. Sometimes I even play a game. All the while, I’m losing time with friends, family, coworkers, and the world around me. I am so connected to my phone, that I’m disconnected from everything around it, and I’m not sure I like that anymore.

The Watch also comes with a killer activity app. It tracks overall movement, how often I stand up (and tells me when it’s time to do so), and working out (excessive movement) throughout my day. Have I burned enough calories? Should I stand up and move around a bit? Did I reach my goal for the day? What is my heartrate? Apple Watch will let me know. For some reason, Apple Watch has been the encouragement I’ve needed to be more active, and for Apple, this is a huge selling point. There is not yet a competing device that does what Apple Watch can.

Communicating with friends is both fun and easier. Instead of being relegated to texting, voice calls, and FaceTime on iPhone, I’m able to now send picture messages, my heartbeat (which is both cool and creepy), and some crazy new emojis. I’ve felt a little strange using dictation, the most incredible feature on Apple Watch, to respond to texts. But overall, it makes my life just that much easier. Text comes in. Tap tap. Respond. Done. There’s little to it, and it keeps me away from my phone.

Here is what really bothers me; I love watches, I love how they look and how they function, and I think the face of the watch is a really special and distinctive feature of owning one. What I can’t understand, is why Apple has such a limited selection of digital and pseudo-analog faces on the watch, and yet will not allow third-party ones on its App Store.

While highly customizable, Apple Watch faces just don’t pop like I hoped they would. They’re actually too simple. But this is an easy fix, and when all’s said and done, this specific issue can be amended through software.

There's no doubt: Apple Watch keeps me grounded. It keeps me close, yet far from my iPhone. It keeps me dedicated to the world around me and the tasks at hand. It brings me back to reality in a way no other smartwatch ever has. It looks amazing while doing so. I love my Apple Watch, and while it might be too early for many people to buy one, it was the right time for me.

In the future, Apple should consider lowering the cost of the sport and watch models by $49. $349 is much more attractive and reasonable than $399, because ultimately most people won’t want to buy a 38 mm Apple Watch when the 42 mm is just right.


Should you buy an Apple Watch? Probably. Is it worth the investment? Definitely. Is there anything out there even close to it? Nope.