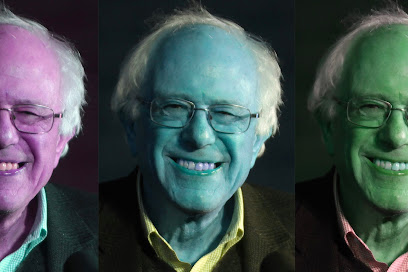 It feels like it’s 2016 all over again for the Democrats. Fighting through an overcrowded field of initially over 20 candidates, Bernie Sanders and Joe Biden have emerged as the frontrunners for presidential nominee in the Democratic Party. Both candidates are wildly different from each other on nearly every issue from healthcare, to student debt, climate change, and everything in-between. Biden represents a resurgent albeit uninspiring consensus of a panicked  Democratic Establishment (comprised of the DNC and its wealthy donors, not African American voters as a confused Biden recently suggested) that has made this same bet on centrists before with Walter Mondale, Al Gore, John Kerry, and most recently, Hillary Clinton—and each time we lost big to Republicans. Conversely, Sanders represents a party running to the left, fed up with the imbalance of wealth and power in the American political system, Bernie embodies a progressive vision for an America that works for everyone, not corporate interests.

It’s tempting to contribute the Democratic Party’s past failures to the Electoral College, to significant—if often implicit—misogyny among the electorate, and to apathetic voters who simply couldn’t be bothered to actually get out and vote. Clearly, there are numerous factors that have undermined Democratic success, but at the heart is a centrist myth that the Democratic Establishment has held onto for far too long. Centrism and a naive willingness to negotiate with its political opponents have become a hallmark of the Democratic Party, but not the Republicans. The GOP and its leadership are masters of positioning their cause as ‘us versus the enemy,’ and have proven unwilling to compromise their interests with Democrats. While some might like to believe that the answer is centrism, it’s hard to make an appeal to work with folks who refuse to work with you. The Republican-led U.S. Senate is a perfect example of this, with over 300 bipartisan House-passed bills sitting on Majority Leader Mitch McConnell’s Senate office desk. The Democrats are the enemy. Republicans don’t negotiate with the enemy.

In a time of hyper-polarization, it is unfeasible to run to the center. In Ezra Klein’s recent book, Why We’re Polarized, the Vox Founder and Editor discusses the impact of polarization on our political system, specifically dedicating a chapter to the irrationality of bipartisanship. Klein’s chosen case study is the now-infamous Supreme Court vacancy of the late Justice Antonin Scalia and Mitch McConnell’s refusal to use the Senate’s consent power to pass through the nominated centrist Merrick Garland, a pick that in 2010 was agreeable to then-Senate Judiciary Chair Orrin Hatch, but suddenly inviable with a 54-seat Republican majority. Klein cites the problem as one of legitimacy, one that we are uniquely doomed to grapple with as a result of our federal republic. Unlike Parliamentary systems that have one coalition in power, the American system could have different parties in control of the legislative or executive branches of government, and thus multiple electorates to be considered legitimate. McConnell did what he saw fit, to represent his Republican constituents and to utilize his majority to reject President Obama’s court appointment and wait for a newly elected executive to submit their appointment, citing Obama’s lame duck period as his reasoning. But McConnell did not need a reason, having the power of consent of the Senate at his disposal, he used it. Klein poses an important question that is fairly emblematic of our current debacle, asking, “why shouldn’t both sides use and, when possible, change the rules to maximize their advantage? The problem is that we have a political system where the rules create irresolvable conflict, gridlock, and even global financial crises.” Why run to the center when there’s no room for bipartisanship?

On Super Tuesday, Biden managed to capture many southern states. Biden, of course, was propelled by endorsements from three former competitors in the 11th hour leading up to the vote: Beto O’Rourke, Pete Buttigieg, and Amy Klobuchar. In this consolidation, Biden won many states he was projected to lose to Sanders. This, and a weekend of positive media attention after his surprise victory in South Carolina, which he and others attributed to the important endorsement from House majority whip and South Carolina representative, Jim Clyburn. Super Tuesday was a big night for Biden, who with low expectations brought out moderates and suburban voters. Democratic voters in suburbia, especially the Baby Boomers, have one issue and one issue alone that they are voting on: defeating Donald Trump in the general election.

Biden famously (or perhaps infamously) trumpeted a return to normal—a fierce neglect of the very issues that propelled Trump to the Oval Office in 2016. Voters in urban and rural communities in both parties are suffering, an estimated 40 million Americans are living under the poverty line, half a million of whom are currently homeless. Wages remain largely stagnant, as they have been for the last twenty years. Millions of jobs have been lost to three decades of disastrous trade deals that allowed corporations to send manufacturing overseas. Climate change is causing real damage to communities worldwide, and will continue to worsen with each day of inaction. Many Americans are becoming sicker, unable to access the healthcare they so desperately need. By itself, a return to a pre-Trump “normal” is not acceptable in the face of these challenges, nor is it a winning strategy.

While Biden continues to claim that he is the most electable candidate in the race, Bernie Sanders continues to win by equal or larger margins in nearly all of the nationwide head-to-head matchup polls against Trump. Why? Because Bernie appeals not only to the millions of young voters that have financially charged his campaign and supplied him with thousands of volunteers in every state, but also to those fed up with corporations and the wealthy getting richer while their jobs disappear. Many independent voters who voted Trump in 2016 cited trade as one of their biggest concerns. It’s clear now that Trump’s promises of bringing factories back to states like Ohio, Michigan, and Kentucky were utterly hollow. Sanders, however, a candidate who has fought for the rights of workers and unions his entire lifetime, offers substantive, material improvement for Americans in the Rust Belt and beyond who have been left to endure the negative consequences of deindustrialization without adequate government support. His fight alongside workers against Amazon gave him the edge he needed in California, along with an outpouring of support from Latino voters. While Bernie obviously needs to turn out more new voters and progressives beyond his base, he still has plenty of chances to do so in the same ‘fly over’ states that Clinton lost to Trump in 2016. Sanders can make a compelling argument in the looming primary states that he, the senator who voted against NAFTA in 1993, and PNTR with China in 2000, is the candidate best suited to run against Trump in November—not Joe Biden, the senator who supported both of these highly unpopular free trade agreements.

As we look forward from Super Tuesday, we should dispel with the preposterous emerging narrative that says that the time is now for the progressive wing of the party to get in line and back Biden, a candidate who would require us to check our values at the door. Fundamentally, this moment constitutes a major transition for the Democratic Party, a changing of the guard. Biden represents not a return to “normal,” but a losing electoral strategy for Democrats in the most consequential election of our lifetimes. And let’s not forget the many gaffes Biden has made. Conservative media, including Fox News, is already presenting these gaffes as evidence of cognitive decline. We underestimate the effectiveness of this attack at our own peril.


Ultimately, it’s difficult to know for certain a candidate’s electability until they’ve, well, been elected. Biden has won eleven contests since Super Tuesday—a truly unexpected comeback fueled by last minute endorsements and the coalescence of the centrist wing of the party. With only Biden and Sanders left standing, their contrasts could not be more clear. Next week, on March 10, Democrats should vote for Bernie Sanders, a candidate that offers voters not only a chance to defeat Donald Trump in November, but also the chance at creating a more just republic.