Right to Bear Arms or Freedom? Pick One. 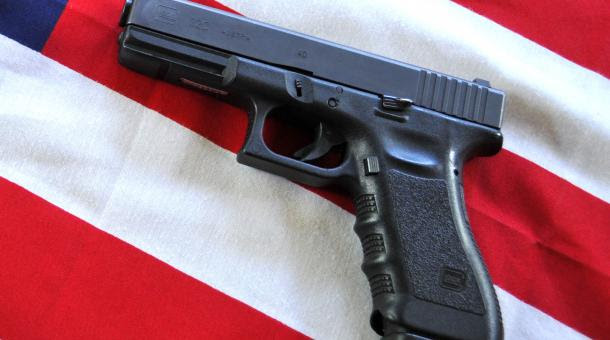 I usually use this site to write about technology, but this week is so different for me. I don't know about my readers, but I have spent this entire week reflecting upon the terrible tragedies that transpired at Sandy Hook Elementary. All week I have bounced back and forth between anger and sheer grief. My heart goes out to the victims and their families from this terrible day.

The word “gun” is short, but it is loaded.
To Americans, guns represent danger, safety, fear, destruction, death, freedom and so much more. We live in a culture dominated by guns. The United States is the biggest producer and consumer of guns in the entire world. We are also the country responsible for the largest count of shootings and gun murders.

Just this past week, 28 lives were taken by guns. 20 of which were innocent children being protected by 7 equally innocent teachers who wanted nothing more than to keep their children safe. But they couldn’t protect them, and neither could harsh gun laws... because there aren't any. 20 beautiful, young, innocent children were stripped from this Earth in the blink of an eye because a disturbed individual was allowed access to guns.

According to “The Coalition Against Gun Violence,” the number of homicides in the United States resulting from gun violence from 2000-2008 is 86,112. And that number is only including firearms. If you count other weapons, such as knives, explosives, poison, fire and others, the total number is 129, 741 deaths. That number is taken from the United States Census released in 2011.

Despite the statistics, Americans continue to resist gun regulations, referring to the US Constitution. The second amendment states “A well regulated Militia, being necessary to the security of a free State, the right of the people to keep and bear Arms, shall not be infringed.” Note that this phrase does not provide that all citizens have the right to own, carry, and use firearms. Instead, it permits for citizens to have the right to bear arms in a “well regulated Militia” if needed to overthrow a corrupt government.

Unless you’re a time traveler from the 1800s or poorly informed, you should understand just how outdated this amendment to the Constitution is. A group of citizens should no longer have the power to fire back at the U.S. government, which has one of the most powerful militaries in the world.

This begs the question: what exactly is the purpose of keeping the second amendment in its current form? What need have we for citizens to assemble and have the right to own potentially deadly means? That answer is simple: we don’t. It is clear that too many people have died in this country, victims of other people’s right to bear firearms.

But understand, I’m not proposing an all-out ban of firearms as much as I am advocating stricter regulations. A recent article in the Seattle Times found that attempts abroad to intensify the strictness of gun laws significantly reduced the number of homicides in each respective country- both firearm and non-firearm related homicides.

Interestingly enough, we aren’t the only country to own a lot of guns. Just look at our neighbor to the north, good old Canada, and you’ll find plenty of gun-loving maple syrup making men much like those in the states. However, it seems that Canadians don’t suffer the same massive tragedies that we Americans do. Yet they have access to and own such a similar number of weapons? How can this be? Well, it’s simple. They’re not as fearful as we are.

The 2002 blockbuster documentary “Bowling for Columbine” found just the same thing. Americans, from the time that the first man stepped off the first boat into Jamestown, to the American Revolution, the Civil War, Vietnam, and everything in between, Americans have always taken extreme measures to protect themselves and ensure that the world around them has been tweaked to their delight. But hey, that’s just human nature, right?

Wrong. That’s American nature. American tradition. American values. This is how we have carried ourselves as a people and as a nation for centuries. Americans don’t think, they act. And they always have. From thoughtlessly annihilating the Native Americans in what we deny but know to be genocide, to the colonial-age Salem Witch Trials, and the McCarthy Hearings in the 1950s, Americans are fearful little creatures willing to take out any possible threat to their own selfish existence.

And honestly, do any of us really want to live in a world where teachers need to be armed? Or how about where every school requires metal detector screening to get in and out? What if we just put metal detectors everywhere? Just imagine how expensive and tedious everything would become? Realistically, this is how things are turning out to be. It’s only a logical next step to protect schools the way we protect airports. After that, every public facility would naturally follow suit. Tell me, just where is the concept of life, liberty, and the pursuit of happiness found in that situation? You’re right, intelligent reader, it isn’t anywhere to be found.

So how about this; let’s stop letting crazy people get access to guns, okay? Let’s require aspiring gun owners pay for psychological exams and wait a grace period until they are permitted to receive their desired firearms. Also, let’s just get rid of consumer access to assault weapons altogether. Remember, they’re called “assault” rifles for a reason... and I’m pretty sure it’s not to hunt deer.

Think! We can do this! We can better society by making it safer! Americans shouldn’t have to live in constant fear, even if they have for centuries since their existence. It’s still possible to relinquish our reputation as the country that we once were and still have the ability to be. We mustn't allow another innocent group of children to die in vain because we couldn’t let go of our pistols and rifles. Because if we don’t, and we allow these terrible tragedies to continue, I fear there is little hope left for a free America.

March 05, 2020
It feels like it’s 2016 all over again for the Democrats. Fighting through an overcrowded field of initially over 20 candidates, Bernie Sanders and Joe Biden have emerged as the frontrunners for presidential nominee in the Democratic Party. Both candidates are wildly different from each other on nearly every issue from healthcare, to student debt, climate change, and everything in-between. Biden represents a resurgent albeit uninspiring consensus of a panicked  Democratic Establishment (comprised of the DNC and its wealthy donors, not African American voters as a confused Biden recently suggested) that has made this same bet on centrists before with Walter Mondale, Al Gore, John Kerry, and most recently, Hillary Clinton—and each time we lost big to Republicans. Conversely, Sanders represents a party running to the left, fed up with the imbalance of wealth and power in the American political system, Bernie embodies a progressive vision for an America that works for everyone, n
Post a Comment
Read more