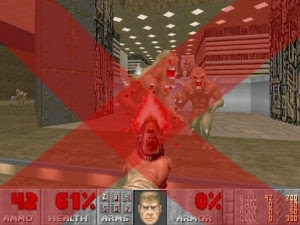 The video game rating system established by the ESRB (Entertainment Software Rating Board) has been in play for seventeen years now, controlling the way parents buy games and the ways stores can sell them. One the main figures behind this movement, ironically, is one of my favorite political figures- Hillary Clinton. I personally think the parents should be the ultimate decisive factor in purchasing video games for minors- I don't really think it needs to be a technical legality. The country we live in was a land founded on a movement of freedom for religion, press and now media. But video gaming as a social medium hasn't been treated the way we treat literature. Unfortunately these restrictions are also placed upon Audio (VERY RARELY) and video content- which ultimately is very unconstitutional. I guarantee that if our founding fathers were here today they would spit on the congressmen and women in charge and smack the supreme court. The entire judicial system is arguably one of the most dysfunctional and non-realistic governmental powers in the world. Unfortunately, the desire to change this system is overlooked by the all powerful governmental figureheads who take decisive action on things they have personal issues with. Personally I think of it as so; the constitution knows all, let your common sense figure out the rest. Sadly, my adage won't likely be adapted by anyone but myself, and the world will continue to be a place that revolves around perpetual bad decision making. But people will continue to be ignorant of the world around them. As it stands, a large chunk of the population doesn't know who the first president is or where their state is on a map. The world has recently become so caught up in the social media as an entertainment medium that stupidity and utter bigotry has taken place of common sense and knowledge.

You may be asking yourself "why would the government violate the legalities from which they have been uprooted?" Well, simply, because they can. Censorship, which has since been a huge part of everyday American life, was once the anti-epitome of ideal human and American life. Freedom of speech, the very guardian ideal that has hovered over our country has since been trampled upon like an insect on the sidewalk. The untouchable clause of the constitution- of our bill of rights, the guiding principle behind our lifestyle, is fading into nothingness. Eventually, if this persists, many technicalities may be explored within the internal guise of the government and we will gradually fade into a dystopian land much like post WWII Russia or post WWI China. The very world which we once fantasized will not only be improbable, but impossible to achieve.

"Wait a minute, what does this have to do with gaming?" Let me answer that question with a question; do you enjoy your ability to choose? As fully functioning legal adults, choices and decisions guided by rationality are made consistently- it's life. But imagine if slowly, your ability to choose what you want (reasonably) and that you want it- but wait! Mr. Wall Street is no longer able to sell it. Big Brother said no. Big Brother took away your privilege to choose. He locked it away in a small, tin box and he swallowed the key, tossed the box into an ocean and burned the ocean with the sun. Your life has suddenly been controlled by a single force, one which guides and manipulates you like a puppet. You ain't got no name, but it ain't you to blame, you're only a pawn in their game.

The facts, as they are now support that video games should be apprehended and replaced with cute, violence-less titles filled with bunnies and happy faces. The questionable violent content that has apparently taken over gaming will cease to exist. All your favorite FPS games? Gone. Even games like Super Mario Bros will be screened out. However, not all the facts have been looked at completely. Gaming is a larger industry than the film industry. In terms of monetary growth, it has zoomed far past other mediums and has become a dominant role in the lives of Americans, the Japanese and many other cultures. Gaming is more than a phenomenon- it's a way of life. Previously foreign names such as "Mario" or "Halo" or "Nintendo" or "Pac-man" have become widely known household names. The world is a very different place than it was twenty years ago. Here's the scary factor; gaming is less than forty years old. Television is around eighty. The world in the last nine decades has drastically shifted, and with it, has society. As Bob Dylan once said "the times they are a' changin".

Thankfully, all of the scenarios presented in this article are not likely to occur. The what if's are fortunately not practical in a real world. The supreme court's final ruling? Gaming has officially qualified in the same level as freedom of speech. Yes! The battle is won! In fact, here is the exact ruling... a small, but significant token of the great men and women guarding our god-fearing nation.

Like the protected books, plays, and movies that preceded them, video games communicate ideas—and even social messages—through many familiar literary devices (such as characters, dialogue, plot, and music) and through features distinctive to the medium (such as the player’s interaction with the virtual world). That suffices to confer First Amendment protection.

This is a victory day for gaming; a landmark for freedom of speech and the way in which it governs the final decisive actions taken out by the all mighty supreme court and the tiny non-so-supreme courts under it.

However, there still is the problem... for children. The ESRB will continue to wave it's obnoxious wand of rating selection as the law makes special accommodations for speech that is "obscene to youths". The court has even highlighted the obscene scrutiny of California and their special beliefs, noting the obvious vehicles that could be used to aid a parents decision in buying their child a video game. And ultimately, the decision is up to the parent; fortunately the legality of "underaged game playing" has not yet been questioned nor battled inside any public forum or courtroom.