Using Mac OS 9 For A Week 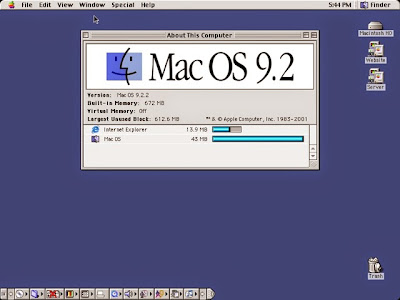 Nearly fourteen years ago Apple refreshed the iBook line of clamshell-style consumer notebooks with a more streamlined, white, rectangular design. What came of that was the 12 inch "Snow" iBook, which eventually grew up to become the iBook G4 and the MacBook.

Around this time, Apple was just getting its feet wet with Mac OS X, and using OS 9 was still a viable option. Sure, it didn't have protected memory or preemptive multitasking, or that delicious aqua UI, but it runs really well on 300+ MHz processors and 64+ MB of RAM. So, for the sake of seeing how well OS 9 runs on higher end hardware, I decided to do a test.

In 2002, Apple refreshed the Snow iBook G3 with high speed processors, 128 MB of RAM, and 16 MB of VRAM. These things were screamers. And with 5 hour battery life, and AirPort wireless, they were the ideal mobile computers for students and consumers alike.

For my purposes, I did this test on a 700 MHz Snow iBook G3 with 384 MB of RAM, 16 MB of VRAM, a DVD/CD-RW combo drive, AirPort wireless, and Mac OS 9.2.2. This is the last known iBook able to boot into straight OS 9 without the need for OS X and a classic environment. For my tests, it was perfect.

So the question arises, what in the hell is it like to run solely on Mac OS 9, an OS that hasn't been supported for over 12 years, in the insane internet world of today?

Not too shabby, actually.

Mind you, I still used my iPhone 5S for a lot of things, but this holds true most often anyways. In today's world, the mobile phone is pretty much everybody's workhorse, regardless. So, although I didn't live the 99' lifestyle in full, I still experienced mostly OS 9.2.2, and that's all that really counts- right?

Let me quickly name some helpful apps I found useful during my experience:

Classilla- web browser with modern capabilities- no WebKit, but still functional  for most mobile webpages.

iTunes 2.0.4- just no frills iTunes for some jukebox action while working

Microsoft Office 98- this actually ran really well on my iBook, and I never found myself needing any of the newer features office has to offer.

Marathon Trilogy- because hey, a boys gotta have fun, right?

Simple Edit- text editor bundled with OS 9. Nothing much else to report here.

Outlook Express 5.0.6- for email. Runs really well. Doesn't manage images as well as one would hope, but it's sufficient for basic emailing.

So a week out, what did I find? You really can't live within a pre-post PC computer in a post-PC world. The internet is vastly different from what it was in 2002, when Apple terminated support for OS 9. As a result, while OS 9 screams on a 700 MHz processor and 384 MB of RAM, it totally falls apart with even the most basic modern internet tasks.