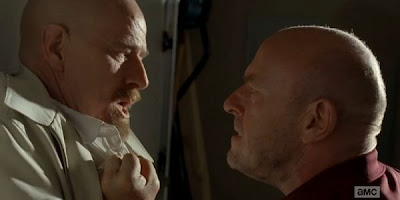 For one, Walter now knows that Hank is on to him, and nothing makes this more evident than the swing Hank took at him last night. He's angry. His brother-in-law, a man he had confided in and trusted for years, had dealt to him the ultimate betrayal. Perhaps Hank's biggest struggle moving forward is how to deal with his own family being his biggest enemy. Walter had done a lot to keep Hank off his tail- almost killing him in the process. And now that Hank knows who Walter really is, it's only a matter of time before Walt's world comes crashing down. One thing is for certain though, Walter isn't going down without a fight. Then again, neither is Hank.

Although the ending scene of this episode was probably the most shocking and powerful, there was something really curious about the other forty minutes of the episode.

Again, we were thrown a year into the future, with Walter obviously on the run and in the car he had purchased from his gun-man eight episodes prior. And again, we were left wondering two more things: to what point had Walt gone to defend himself against Hank and the DEA, who left "Heisenberg" painted over a wall of his house, and who does he plan to take out with the ricin he removed from his old home?

Whatever extent Walt went to, we know it was something serious for it to cause his neighbor to drop her groceries on the ground and cower in fear from his simple hello.

Then we have the loose end of Lydia: begging for Walt's return to the business after only being able to achieve a 68% purity in her meth as opposed to the cook's 99%. But as sure as he is happy to have his old life back, Walt doesn't intend on looking back, and neither does Skyler. Seeing her threaten Lydia definitely reveals how defensive she is to retaining her restored life with her family.

And of course, we can't talk about this episode without talking about the title, "Blood Money." Jessie's guilt lies not in the blood money but in the blood itself. Jessie and Walt were ultimately responsible for many deaths. And for Jessie, the only lasting glint of morality on this show, these deaths are tearing him apart. Jessie struggles throughout the episode as to how he should deal with his riches, but the way he deals with it is probably the only thing he can do: help everyone he might of hurt. He shares his fat stacks, something Walt could never fathom, with those way worse of than him, and as viewers of the show, we can't ignore this to be a natural position for Jessie to take. Whereas Walter was far more civilized and proper in the beginning of the show and Jessie was the dumb addict who couldn't stop yelling "yo" and "bitch," Jessie has matured immensely into that which Walt once was.

Before I leave to talk about tech again, let me leave you all with this: next week is going to be the beginning of Hank's persecution of Walt. I can feel it. Can't you?