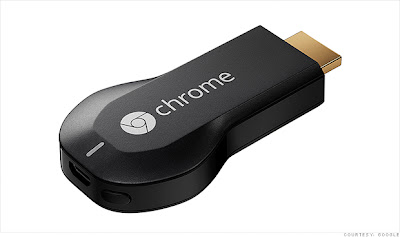 INTRODUCTION
On July 24, 2013 Google revealed two essential products: the new Nexus 7 tablet to update last year’s popular release, and a new product called Chromecast. Immediately upon reveal and pre-order release online, Chromecast was sold out. The device, which costs a paltry $35, allows users to stream content from most devices to any given television. However, instead of yanking a feed from the device in question, Chromecast instead pulls up the media file independently, resulting in extremely fast and uninterrupted streaming that is ultimately more ideal than anything that has ever been available for purchase.

WHAT IS IT?
The Google Chromecast is a small usb-powered HDMI connected dongle that allows you to project multimedia from any device running Chrome or Chrome OS. This means iPhones, iPads, Android phones and tablets, laptops both Mac and PC, and Chromebooks. It’s very small, taking up as much room as a USB drive, but in the back or side of your television, meaning that the device is almost non-existent. Setting up the device with an HD TV is also very simple and quick to do.

WHO IS IT FOR?
This device is great for anybody wishing to share content from their phone or laptop or tablet to a larger screen. Since most people have an HDTV and one of the three above devices, the $35 price tag is very reasonable and definitely qualifies as an impulse buy.

WHAT IS YOUR FAVORITE THING ABOUT IT?
I really like how easy it is to set up and use and the size of the device. Knowing that I could easily connect any of my devices to my TV with almost no effort is a pretty awesome feeling, and being able to stream music from my terrible Acer C7 Chromebook speakers to my TV is something I am already using daily. Again, the size of the device is ideal because it remains tucked away behind the TV and doesn’t get in the way of any of my other devices.

WHAT DON’T YOU LIKE ABOUT IT?
I sort of wish I could connect the device to Wifi directly instead of setting up the device through a laptop or phone, but this a pretty minor complaint. Another thing I don’t really like is the current lack of official support for my Acer Chromebook. Although I am still able to do pretty much everything, video is a bit laggy from my laptop, which becomes frustrating, depending upon the speed of my laptop.

WRAP IT UP BABY!
I’m going to make this short and simple: buy this device. It’s cheap (really cheap), easy to use, compatible with just about every device you may own, and for the most part, it just works. At the end of the day, isn’t that what all these streaming devices are supposed to do anyway?