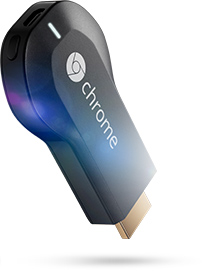 Good news, Chromecast fans! The device beloved by cheap Google-loving bastards everywhere will now be available in all of its glorious beauty very soon. For me, mine is expected by the 19th. For many people, that date, or dates close to then is being released by Amazon. Those of you not familiar should enjoy the quote from a previous article below:

The Chromecast is a tiny, 2 inch thumbstick that fits in the back of ANY HD television with its HDMI port, and is compatible for device to television streaming from any Mac or PC running Chrome, Android, iOS, and the Chromebook Pixel (although other Chromebook will soon be included as well). The device, while it doesn't mirror screens, will throw content directly from the Chrome browser or Android phone or Chromebook directly onto the television.
For an extremely reasonable $35, the Chromecast is way too reasonable to pass up. Think about it, what else have you spent thirty five dollars on? A shitty little USB thumbdrive like ten years ago? Yeah. And how did that work out for you?


That's the gist of it. The official Max Bleich-approved Chromecast review should be posted within the next week. I'm very excited, and you should be too. Until them, check back here for the latest and greatest in my opinions and reports back from the magical land of tech! I like magic tech. Mmmmm...
Posted by Max Bleich at 9:05 PM