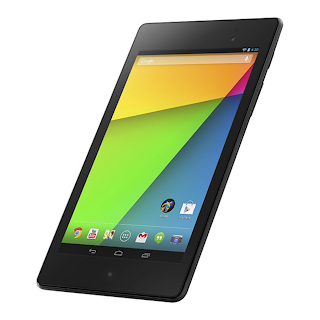 Google's never been one for secrecy, and the latest pile of Nexus 7 news is definitely a reflection of such: the update to the beloved on-the-cheap Google-made Android tablet is on the way. Well, actually, it's already here and shipping. In a move strange and questionable, Google has (possibly?) opted to quietly release the newest Nexus 7 through Best Buy. No special product launches, no announcement, nothing. Just a product available through a single sales channel. Odd, but hey- we'll take it.

The new Nexus 7 comes packed with a 1920 x 1200 resolution display with a pixel density of 320ppi. Such a thing really makes you wonder how we once lived with displays where you could visible identify lone pixels on the surface, but I digress. Under the hood, the Nexus 7 sports a quad-core 1.5 GHz Snapdragon Processor, and 2 GB of RAM. There are reports that the amount of RAM is actually 4 GB, but no official word is out yet. The newest Nexus is also thinner than its older brother, although we don't have those specs as of right now.

For a paltry $230, you can pick up a tablet that, according to Android Police, out-performs the HTC One. Follow the link below (or above that I embedded in the article) to pick up one of these bad boys, and stay tuned for more news and reviews of Google products every week, here, at TheTechTile.

Source: Best Buy via The Verge
Posted by Max Bleich at 7:49 AM